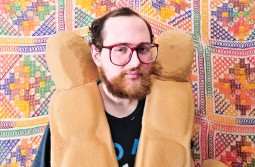 Politics aside, Dan Deacon loves America — so much that he named his new album after the country. Photo by Josh Sisk.

Dan Deacon’s new album, “America,” is officially released today, and to mark the occasion, we’re going to play the entire second half — a 22-minute classically inspired ode to the United States.

Why would we do such a thing? Because this is WTMD, where we support Baltimore musicians. And few musicians are as crucial to Baltimore’s music scene as Dan Deacon. So why not?

Several years ago, when Deacon and the rest of the Wham City arts collective moved here, they helped put Baltimore’s music scene on the map. We’re dedicating tonight’s show to the music of Wham City.

Our guest will be Ed Schrader, who recently released the album “Jazz Mind.” Schrader just got back from a six-week American tour — he had ice thrown at him in Vancouver, and discovered that the Flaming Lips’ road crew loves the Ed Schrader Show (the talk show he used to host). He’s even thinking about bringing it back.

The first half of Deacon’s new album is the wild, quirky Deacon we’ve come to know and love. The second half shows his more serious classical side (not too long ago, he even scored a Francis Ford Coppola film).

Get ready, Baltimore. “America” is coming your way tonight.