Last night’s Motopony show was quite lively as the band is a big fan of multiple tambourines and perpetual motion. I arrived late, only got to hear four songs, but they were rocking.

Austin-based band What Made Milwaukee Famous followed at the venue. They played several new songs from their anticipated summer release. I’m a big fan of a horn section, so I was very happy when a trumpeter and trombonist joined the rest of the band on stage.

I neglected to post a graffiti6 photo from their Speakeasy showcase in yesterday’s SXSW Days 2 & 3 entry. So, it’s in today’s entry. They’re also playing a Filter magazine party at 4pm, just in case any of you feel like playing hooky, jumping on a plane and joining the fun here in Austin.

Today’s agenda: Gary Clark, Jr., Shearwater, two panels, a meeting with Martin Atkins, Sonicbids party, Lower Dens, Of Monsters and Men and Built to Spill. I’ll see if all of that actually happens! 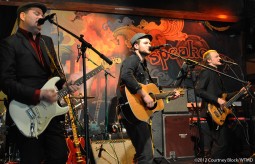 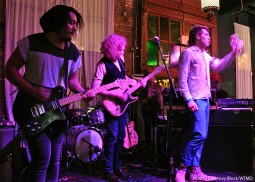 Motopony at The Studio by HGTV