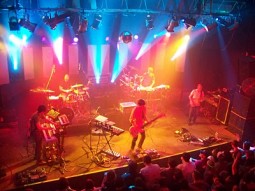 The jam/electronic/rock group Lotus has released their latest, self-titled, studio album. It was released on September 23rd, 2011 on Sci-Fidelity records. With this new release the band will be performing two nights in Baltimore on November 25th & 26th at Rams Head Live. It isn’t easy to describe a band like Lotus, who tends to blend many different genres and styles to create a style that is distinctly their own. The band incorporates elements of rock, electronica, jazz, jam, and funk into what has become their sound. The band originally played more as a straight forward “Jam” band that leaned heavily on funk, rock, and jazz styles. Most recently, which is most evident on their new release, they have leaned more towards electronic influences. The band’s bass player, Jesse Miller, said of the band’s sound: “I truly believe Lotus’ sound comes from the roots of rock ‘n’ roll mixed with electronic beats that are popular today. It took a long time for us to finally find a sound we all agreed on, But believe me, we experimented plenty before deciding what sound we were looking for”.

The band’s last studio release was “Hammerstrike”, which was released in 2008. They have released a few EP’s since then but this new self-titled album is the first full length studio record since their 2008 release. The band has built their following with lots of touring, and have relied heavily on word of mouth to expand their fan base.

In support of this latest release, Lotus, will be performing two nights at Rams Head Live on November 25th & 26th. The band are no strangers to Baltimore, as they have played a handful of shows in the area, ranging from The 8×10, Sonar, The Recher Theatre, and Bourbon Street over the past 10 years. These two shows at Rams Head Live will be their last live performances until their New Years Eve show at Festival Pier in Philadelphia.

“Stuck In The Jam” has been able to secure a couple pairs of tickets to both nights at Rams Head Live as well as a few copies of this most recent release and will be giving them away this sunday, November 13th. Tune in to 89.7FM WTMD in Baltimore on www.wtmd.org this sunday evening starting at 9pm to find out how to enter to win a pair of tickets to each night and a copy of the new self-titled release.

You can find out more information about Lotus, and stream the new album, at their website www.lotusvibes.com.

More information and tickets for both nights of Lotus in Baltimore are available at www.ramsheadlive.com/.

Here is a little video treat to hold you over until then: