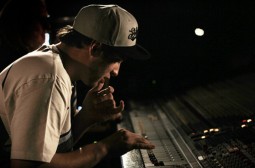 These days it is tough to deny that electronic music has become a part of American culture. From the young people who are packing clubs to hear it, to the music used in films, movies, and commercials – electronic music is here to stay. Electronic music has been around for quite a while, but in the past two years has really taken off with some presence in mainstream media coverage.

Now, five of the top electronic musicians on the scene are teaming up with artists from various other genres to combine their styles, create a song, and have it all captured on film. It’s Project Re:Generation, a documentary that will follow Skrillex, Pretty Lights, DJ Premier, Mark Ronson, & The Crystal Method as they collaborate with artists from a whole host of musical genre’s much different than their own.

Pretty Lights teams up with Ralph Stanley & Leann Rimes for a country & bluegrass inspired remix; Skrillex is paired with Robby Krieger & Ray Manzarek from The Doors for a rock inspired track; DJ Premier is working on a classical composition with the 58 member Berklee Symphony Orchestra & Nas; Mark Ronson enlists The Dap Kings, Erykah Badhu, & Trombone Shorty to work on a track; and The Crystal Method teams up with Martha Reeves & The Funk Brothers for an R&B inspired track.

The film, directed by Amir Bar-Lev, is due out in early 2012. The official project webpage is: www.regenerationmusicproject.com

This is one you are going to have to keep youe eyes out for. Here is a couple of tracks that have been released: