Greetings From All Good

It’s proven that the night time is the right time, after killer sets from the John Butler Trio and STS9 last night/this morning, the festival is in full swing. STS9 had the entire crowd dancing in to the wee hours of the morning bringing their set to a close shortly after 3:45am getting fans in the mood for the many great acts still to play the Crane and Dragon stages. 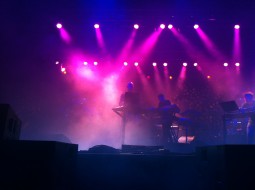 Ice is a hot commodity on the mountain and as the lines grew for the cold stuff, people began filtering into the concert grounds around noon to pick out the perfect spot to be when music began an hour later. And there are some great acts that will be plugging in today and once again into the early hours of tomorrow morning including Keller Williams, Galactic, Umphreys McGee, and Furthur with Bob Weir and Phil Lesh.

If this year is anything like the last here at All Good, the biggest crowd will be for Furthur tonight beginning at 9:30 and going until 1:30am. The festival has been very Dead-Head friendly during it’s 15 year run and this year is no different giving Dark Star Orchestra the closing slot on Sunday.

This truly is a music lover’s festival with no overlapping sets, and if you’re up for it, you could catch every act no problem. The weather has treated us very nicely so far and even though it’s pretty warm out, there’s been a nice breeze keeping everyone happy. We’ll have more photos and stories coming your way over the weekend so keep checking back. Also, service permitting I’ll be getting some tweets out on @WTMD so check there as well.

From the All Good Festival on Marvin’s Mountaintop