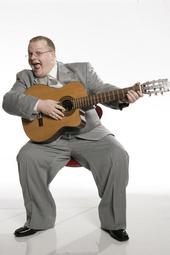 Being America’s Got Talent‘s Season 2 runner-up may have given rise to his career,  but once Cas Haley opens his mouth and pounds his acoustic guitar strings with such surprising rhythmic virtuosity, you’ll be glad this reggae-ska vocal dynamite got the break.

Still, even with the TV boost, the Paris, Texas native works like any other hungry musician, touring incessantly (he was on a bill with others at Bourbon Street last Thursday) to support his wife and two kids back home, which fans of the show know motivates him to no end.

Cas tells us why his second album Connection feels like his first and he demonstrates a surprising vocal influence this Thursday at 2pm on Between the Grooves. Don’t miss this undeniable and uplifting talent!